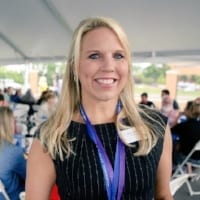 Life is better when we ride together - cycling, driving and leadership

Seconds after the seat belt clicks, sharing a ride with Amy Wilhite reminds us something about being human. Her passion for giving back to her community through service is evident, and so is her competitive spirit.

The former Executive Director of Aegis Sciences Foundation and graduate of Leadership Middle Tennessee jumped into the passenger seat with Carissa Biele on her first Hytch around town. It gave the two time to explore her involvement with many important nonprofits, including Habitat for Humanity, Big Brothers Big Sisters and Second Harvest Food Bank in Nashville. Driven by a passion to make a difference in big ways, she thinks about big solutions.

Wilhite appreciates the challenge some people face with health and mobility. Her vision helped create a four-day, 444 mile bike ride supporting veteran causes. Affectionately referred to as the “Epic444” -- it’s a very big event! Endurance cyclists love the Tour de Natchez Trace, attracting riders to Nashville from all over the nation. The Natchez Trace is the longest National Park and oldest, most scenic highway in America. Appreciating the intersection and tension between the automobile, cycling and healthy lifestyles, Hytch has been a sponsor of the Tour since inception. The idea is to raise money for a great cause, but Wilhite says riders and support teams “go in as strangers and come out as family.”

For Amy and Carissa, the same thing happened on their Hytch - because life is better when we ride together - an afternoon made even more fun by playing a game of BeanBoozled.

Sharing a ride helps make the commute much more pleasant, Wilhite says. “You don’t really think about all the traffic around you because you’ve got someone to sit there and talk to.”

Maybe there’s also something about sampling moldy cheese and spoiled milk flavored jelly beans that creates an instant bond. But that’s not the only benefit of sharing a ride with Hytch. It may be the best way to take cars off the road and reduce congestion because Hytch Rewards will pay cash to users who track their shared ride in the app.

With the annual cost of traffic congestion per driver in the form of lost time and wasted fuel in Nashville at $1,168, residents need a way to contribute to the solution. Everyone is surprised to learn that the best way to eliminate your carbon impact from driving, and still drive, is to share a ride with the Hytch Rewards app. Hytch users actually create a carbon neutral mile when they use the platform and carbon offsets reduce Nashville’s environmental footprint.

That’s why Hytch, winner of the Nashville Technology Council’s Emerging Company of the Year for 2018, has developed a solution that gets you paid for sharing a ride. Through a partnership with Nissan commuters who ride together in Middle Tennessee can each earn up to $.05 cents a mile if they track their ride with Hytch Rewards.

While state and local governments are working hard to advance larger-scale solutions through long term planning and policy, the problem only gets worse as Nashville continues to grow. Like Wilhite, many middle Tennessee residents want to give back to the community and sharing a ride is a great start. It saves time, pays cash and helps reduce emissions by taking cars off the road. You could even Hytch to your next Habitat for Humanity build.

“Be sure to give the links in the description a visit and download Hytch today to help fight against the traffic,” says Wilhite. “It’s really been an issue in Nashville and we can do our part to help out, so look up Hytch!”