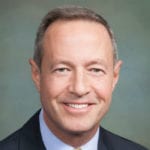 Martin O’Malley has spent his entire career fighting for underserved and middle-class communities. He has served as the Governor of Maryland, Mayor of Baltimore, and a city councilor—earning a reputation as a bold, progressive, and pragmatic executive who is willing to take on tough shared challenges.

Recognizing the threat that climate change posed to Maryland’s coastal communities, O’Malley took action to reduce greenhouse gas emissions, invest in renewable energy, and grow green jobs. He also worked to uplift the dignity of all Marylanders—by signing marriage equality into law, abolishing the death penalty, and passing the DREAM Act to expand the opportunity of a college education to more local students.

In 2015, O’Malley left office and was, as he says, “elevated to the role of citizen.” He and his wife, Katie, a District Court judge, live in Baltimore with their four children.