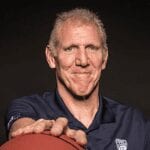 Bill Walton; an NBA Legend, a friend of Hytch, a cycling enthusiast, and an environmental advocate, is simply a part of who we are at Hytch Rewards. Bill reminds us to work for our current team, and the future, with the heart of a champion!

As a guest speaker in our Driving Participation, Scale and Innovation from a Mobility Framework seminar Bill helped Hytch to motivate Transportation Demand Management and mobility thought leaders to act now and make social and environmental justice objectives central to their mobility planning process. A voice like Bill’s reminds us to plant trees while we drive! Here’s the

Bill Walton was the NBA's Most Valuable Player (1978); all-NBA First Team (1978); NBA All-Star Team (1977 and 1978); NBA Playoff's MVP (1977); all-NBA second team (1977); winner of the NBA Sixth Man Award (1986). Walton is one of only four players in the history of basketball to have won multiple NCAA and multiple NBA Championships. Walton is also the second of only five players in the history of the NBA to lead the league in both blocked shots and rebounding in the same season. Also known for his commitment to the environment and social justice, Bill Waltons’ voice is something we want to hear, loud and clear.