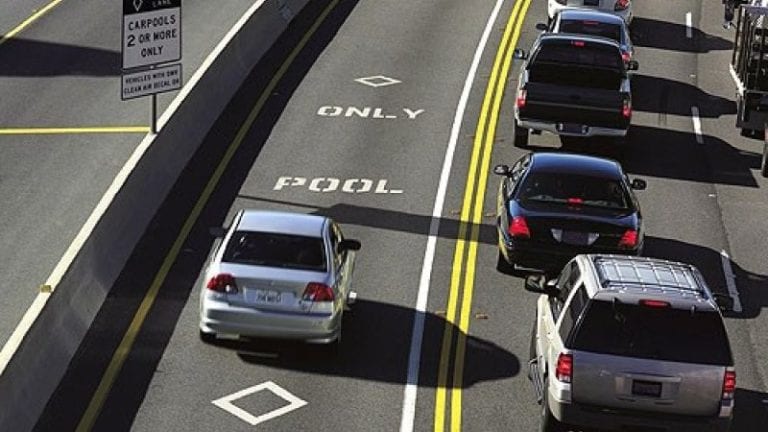 HOV lanes were instituted in the State of Tennessee in 1993 to promote ridesharing with the purpose of reducing congestion on urban interstates. The central concept for HOV lanes is to move more people rather than more cars, which is a core argument for bus and other mass transit options too. Per Tennessee Code 55-8-188, vehicles traveling in HOV lanes must carry the minimum number of people posted on the entrance signs. In Tennessee, that means at least two people. Exceptions include motorcycles and low emission vehicles with a Smart Pass sticker. New lane markings for all HOV lanes in Tennessee, which are located in the Nashville or Memphis metro areas, can be seen here.

For the purposes of this report, “Nashville” or the “Middle Tennessee Metro Area” generally refers to Davidson, Rutherford, Wilson and Williamson Counties where HOV lanes exist. The “Memphis Metro Area” covers the ten surrounding counties reaching, reaching to Arkansas, and Mississippi borders.

Carpoolers accounted for the next share at 9.8%, and public transit accounts for only 1.3%. Participation is 3x below the national average in comparable MSA.

The Memphis Metro Area labor force is comprised of approximately 628,500 employed persons. As DATA USA shows, commuters in the Memphis Metro Area who drove alone were the largest share at 84.9%. The next share is Carpoolers at 8.6%. Public transit accounted for 1%, which is 4.2% below the national average.

Some conclude from these and other studies that the Tennessee commuter “simply will not ride the bus” while others believe a bus ride that does not arrive any faster compared to driving alone, enjoys no competitive advantage.

What if HOV lanes were clear, so bus departure frequency and service level can be increased?