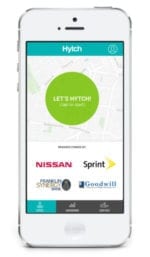 How Hytch Is Making Carpooling Awesome

There was a time when coworkers and neighbors would come together and share a commute in order to save on time and gas. We hear stories of tight knit communities and friendships that have lasted for decades as a result of carpooling relationships from a different time.

Then, there was a change. People became obsessed with owning their own cars. Car ownership became a token of independence, a milestone for teenagers coming of age, and a way to establish social status. This was all great before the roads became so congested that a traffic junky might see a cyclist breeze right by their 470 horse power Jaguar during the 8:00 rush.

That's where Hytch comes in. Our roads are congested, our environment is suffering, our time is wasting, and our wallets are shrinking. Hytch is bringing carpooling back and it's going to be revolutionary. With Hytch, users can meet and interact with neighbors or colleagues who go the same way every day. They can ride together and share the cost at 54 cents / mile or less.

But, how does it work?

Users will download the app and fill out their profile. They type in the name of a contact on their phone or someone's number and invite them to Hytch a ride with you. The person who initiated the hytch identifies who the driver is (them, the invitee, public transportation). The invitee will receive a text message where they can click a link to accept and auto start the ride. From here, the app runs in the background on the phone while you both start earning money while Hytching.

Download Hytch today in the Apple or Google store.